Gianna Gutierrez is a fourth year undergraduate student pursuing her Bachelors in Health Science and Masters of Public Health. She has been with the MCI and Dementia Prevention Lab since her first year of her undergraduate degree and has assisted with the Physical Exercise and Cognitive Engagement Outcomes for Mild Neurocognitive Disorder (PEACEOFMND) study. Since April 2017, Gianna has worked closely with graduate students in the lab to collect data and run participants with MCI and their partners on computerized cognitive tasks. She was chosen for UF’s Undergraduate Scholars Program (USP) where she was mentored by a graduate student to complete her own research project. Her poster was presented at the International Neuropsychology Society (INS) annual meeting in New York City this past February. Next year, Gianna plans to continue her Masters of Public Health coursework and plans to graduate in Spring 2021. 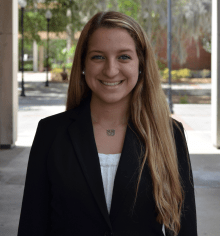